In the past month, I have run a marathon; met a boy; fallen in love; moved in with said boy; flipped my bike without a helmet; sought medical counsel for the aftermath of the aforementioned; reconnected with my musical roots; run a second marathon; been notified of my second non-promotion; spent four days in Rome; sought medical counsel for the aftermath of Marathon 2.0; submitted my formal resignation from the Army; bought Christmas airfare to see my family reunited for the first time in three years; planned a New Year’s trip to Paris; and spent one weekend road tripping through bucolic Bavaria with my boy, with whom I would be perfectly content to spend the rest of my days.

In short, it’s been a wild ride, and I’ve learned a thing or two in the process.

First, back-to-back marathons, when your goal is to break a record (and mine was to qualify for Boston, coming out of my first one with a 3:11:27 – just had to shave a few seconds off of each mile), are really not good for you. Professionals recommend running two such marathons in one year, or three in two years. And there are detailed training plans at my fingertips too! Two weeks is actually the minimum threshold your body needs to recover from a marathon before starting another training cycle, not the refractory period between two of them. Turns out that running a marathon is actually quite traumatic to one’s body, and the symptoms may or may not surface. That being said, your body is capable of so much more than you can possibly know without pushing it to and beyond its limits. And I will run another marathon in the spring. I’ll break 3:00:00 too.

Second, when it comes to the outside world, there’s a lot to be said for human kindness, but it pays to be self-reliant. The good folks who orchestrated the Freundschaftsmarathon in my hometown very thoughtfully placed energy gels at intervals along the entire length of the course. The good folks who orchestrated the Cologne Marathon two weeks later did not… but I did not find that out until I was well committed to the race, my one energy gel consumed, and struggling to run more than 400 meters in a stretch. And let me tell you, the crowd support in that race was amazing. So many people reached out to me, shook my hand, gave me a high five, and gave me words of encouragement… but they didn’t have the energy gels my body craved. I eked out a 3:17:20 and emerged more wounded in pride than anything else- but I learned a lot from veteran marathoners from mere observation, and I have a mind to retain what I learned. Next time, I’ll be prepared.

Third, I’ve learned the importance of taking recovery seriously. Emerging from my second marathon, I had blood blisters on two toes, a nail I felt sure I’d lose, a painful right instep, a painful right hip flexor, and a left knee with which the experience of descending stairs felt a bit like wrapping a tendon ever tighter around an axis… and in the midst of that pain, I learned to appreciate elevators and escalators, rather than to look upon them with disdain. I also learned how to listen to my body – long distance runners run with the pain, not to drown it out (that means no headphones). Five days after my second marathon, I was touring the Vatican, a lifelong aspiration. Three hours in, standing in St. Paul’s Basilica, my only thought was of alleviating the pain wracking my body. I found a Thai massage parlor on Google inside the Basilica, and was at an appointment within the hour. I took naps every day of that trip. I’ve officially hit the two-week mark, and I am still adjusting to my newfound mortality. Lots of stretching, biking, and this sweet exercise called the clamshell. My attitude towards the elliptical has slid from disdain to tentatively inquisitive too. It would seem that injury, like travel, is detrimental to prejudice.

Fourth, helmets are more than just fashion accessories. And I have guardian angels. I flipped my brand new bike on a curb 600 meters away from my house… and miraculously landed on my right hand and left collarbone and side, completely avoiding trauma to my head. In a bit of a daze, I picked myself up, dusted myself off, hopped back on my bike, and rode, blood dripping down my right hand, to my boy’s house. Though I had a key, I was in too poor a condition to use it, so I rang the doorbell and stood there cradling my damaged hand in my whole one, until he answered and whisked me to the bathroom to put me back together. It’s probably for the best that the guy I love also happens to be a medical professional. After I bend my bike back into shape, I may procure a helmet. I do quite like my brain.

Fifth, I know what lies beyond the Appalachian Trail. I’m going to move to wherever the Army sends my boy (we’re jockeying for JBLM), and once there, I’m going to set up shop. I am going full tilt into the humanities. I like self-actualized people, and I like being the spark that gets them going. I want to work in youth advocacy, for every boy who’s ever felt like putting a gun to his head because he doesn’t belong, for every kid who’s never had a parent give him the affirmation that he needs to succeed. And I’m going to work my ass off to share the beauty and wonder of this magnificent world with all who will listen… and in doing so, also do my bit to contribute to a conscientious and principled citizenry. My long game is to go into classroom education, but I’m in no hurry to get there. When the time feels right, I’ll do it. One thing’s for sure: I’m absolutely done pursuing another man’s agenda. Life is just too short to waste it chasing money in hopes of a more stable future. Just live.

Sixth, that inspirational quote about our deepest fear being that we are powerful beyond measure? It’s true. Every word. 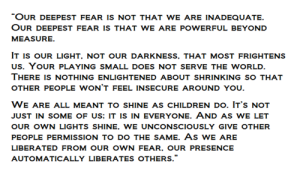 Seventh, no man is an island… and life is so much richer when it’s shared with somebody you love. Three months ago in a Buddhist monastery, I took an oath to limit my sexual relationships to those made known to my family and friends – a personal challenge, as I negotiated through a pivotal point in my life that led me to embrace myself fully. One month ago, I met a boy whose companionship so fills me with joy that I wanted to shout it from the rooftops – so I did. I’ve never felt more unified in purpose, more enlivened, more sure that who I am with is right for me. I have a stable pier upon which to moor my errant soul in the stormy seas of life. I have a life partner who is kind and strong and good, who anticipates my needs and gives license to my every aspiration. He even takes back seat when I sit down to my keyboard, which he so graciously moved to our common home when I was in Rome – but he will tell me when it’s time to turn in, lest I bust my Army bedtime. And he’s great at all the things that lovers do. His name is Loc Dang, and I love him to pieces.

Which leads my eighth life lesson: the richness of life is reserved for those who are open to new experiences in both heart and mind. I’m a bit of a new age idealist – I keep the Holstee Manifesto on my bedroom wall, and I once memorized the Desiderata of Happiness – and I totally believe that adage about finding the love of your life not in looking for him or her, but in doing what you love. I did, and I couldn’t be happier.

Oh, and asserting my own will to define my future for the first time since I chose my duty station as a 22 year old in college was way awesome. Cut the umbilical cord, burn the ships on the shore, whatever: come 1 May 2016, I can doff the damn uniform and speak my conscience without reserve. I’m happily investing the time that remains into getting to know my partner and reviving my passions, but when the hourglass runs its course, I’ll be ready.